The Houston Press – Suzy Gets Revenge 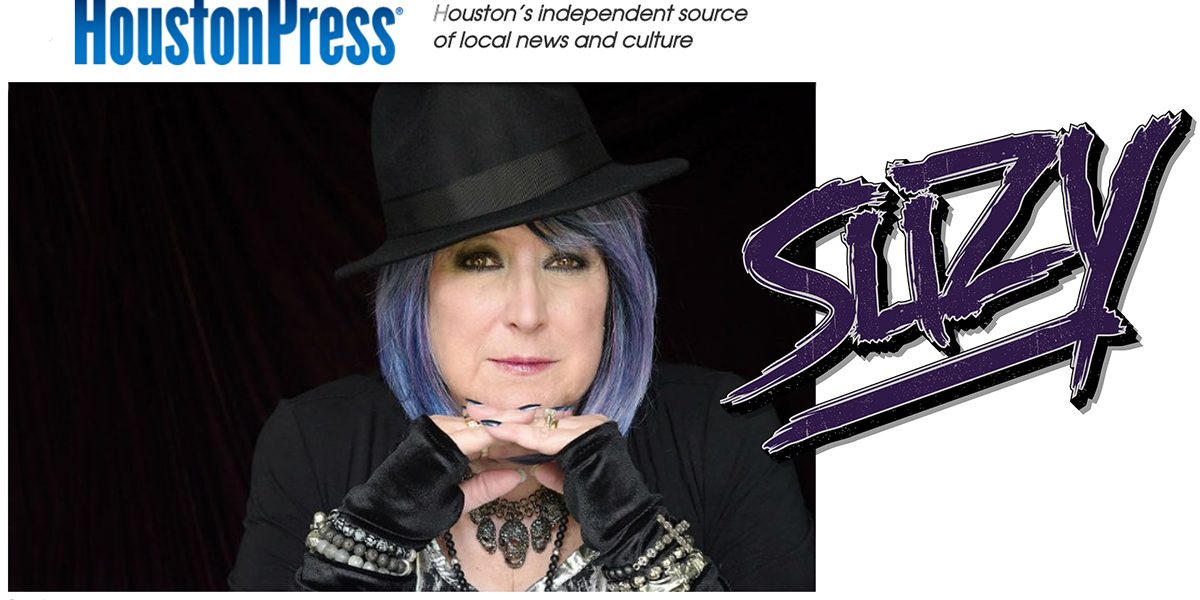 Heavy metal vocalist Suzy released an EP of new songs recently, but it wasn’t so long ago that the Houston singer’s music pursuits seemed hopelessly stalled. She’d started her music career in her 50s, late in life for any musician in any genre, much less a woman trying to make her mark in the boys’ club that is metal. She was sitting on a long-gestating project and felt saddled with musicians who didn’t seem as interested in the music as she. In short, she was at a crossroads, but as any true music fan knows, that’s where many storied music careers have begun.

“I actually had been working on an EP for a while, for about five years, and it had gone nowhere. I had worked with like five different people and every time I would start over, I would start over because of ‘I’m not letting that person who just screwed me over have any credit on this song,’” recounted Suzy Wilson, who drops her last name for artistic purposes. “After about five years of having to start over so many times, I was like, ‘Okay, the universe is trying to tell me I shouldn’t be doing this and maybe I should just quit.’ Every time I would think I was getting somewhere I would find out no, I really wasn’t.”

“Right about that time I got an email from Rock and Roll Fantasy Camp,” she said of the interactive music camp that allows everyday Joes (and Suzies) to write, jam, perform and record with some of the world’s greatest rock stars. The invite in Wilson’s email box was for the camp’s first-ever songwriters’ workshop. The camp’s promo materials promised those artists would work with burgeoning songwriters and critique their work, so Wilson signed up, took the rough mixes of her songs and went to learn “is the universe telling me to stop doing this because I’m not supposed to, or should I keep beating my head against this wall and keep going?”

Wilson’s experience was a success. It gave her the skills and strength to complete her 2015 EP The Best Revenge, which she dedicated to the haters who’d kept the project bogged in development for so long. She built more momentum with return visits to camp – nine in all — and by fostering friendships with some of its stalwarts. Through the camp, she’s shared stages with artists like KISS’s Paul Stanley, Heart’s Nancy Wilson, Cheap Trick and Rob Halford of Judas Priest.

Suzy music in camp counselor Joe Vitale. Vitale has been a mainstay in Joe Walsh’s band and he and Walsh wrote “Pretty Maids All in a Row” for the Eagles’ Hotel California album. He’s got 40 years in the business. So, his encouragement meant a lot more to Wilson than the naysayers. And he, along with Matt Starr – who has played with Ace Frehley and Mr. Big – and Norman Matthew helped Wilson piece together her new EP titled Suzy. The five-track release bowed in October. It was produced by Matthew (As Strange As Angels, Murder FM) who has also worked with Alice Cooper, members of Motley Crue and Luis Miguel, to name a few.

How does someone like Suzy get added to a list of names like that? Wilson said the camp’s counselors truly believed in her songwriting prowess and melodic metal vocals, especially Vitale. She said he plays every instrument but guitar on the new EP’s track titled “Road to Nowhere.”

“We sent him the guitar part and the lyrics and 48 hours later I got this fully orchestrated song that is just amazing,” she said. “He plays everything on it. He played the keyboards, bass and drums and I don’t know what all else.”

How did she get Vitale to play on the album?

“I asked him,” she said. “Those guys that are there at camp, even most of the headliners, you know, like Rob Halford from Judas Priest or any of those people, they’re all just the nicest people you’d ever want to meet. I mean, they’re very friendly, they’re very down to earth, you don’t feel intimidated by them at all.”

Before she rubbed elbows with some of rock’s best-known artists, Wilson had a different life. She grew up in small town Mississippi and arrived in Houston around 1980, left for a while and returned for good in 1993. She worked in public relations and advertising and managed the musical theater company Centre Stage Theatre in Kingwood for about 10 years.

“Oh yeah, I’m a big metal fan. I think some of it goes back to when I was a little kid, one of my friends had a teenage brother. We were little kids playing with dolls, I don’t even know what age. But I vividly remember being in her room playing with dolls and he’s on the other side of the wall and he’s blasting The Doors and Frank Zappa and all these heavier ‘60s, early ‘70s bands. I just fell in love with that.”

If waiting decades to launch a music career seems wrong-headed, consider this – Suzy is as DIY as the kids in the garage band rehearsing in your neighborhood right now. In some ways, she’s chosen the best time to attempt a career at music since she, like many other artists, must do all the work to make something happen, big rock star friends notwithstanding. Age doesn’t count against someone in that regard and her experience might even be seen as an advantage.

“It’s kind of nice to be free, being an independent artist, but it also means you’ve got to do all the business side of things yourself, too. That’s kind of the drawback to the whole thing, you don’t have a label that’s got an advertising department and all those people that do all that stuff for you.”

So, she’s getting familiar with creating mailing lists and buying Facebook ads. She said she’s had to rely on these measures to get the music out since she doesn’t currently have a band with which to play gigs. Wilson
is now 62 so we wondered if she gets grief from fellow artists or listeners who believe music belongs to a younger demographic.

“I probably would if I was out performing more,” she admits. “I had some of that with the people I was working with on the first EP. I had one particular group of people I was working with and I finally came to the realization that they thought I was some rich, bored housewife, that they could just milk me for as much money as they possibly could and we were never going to get anywhere. (They thought) I wasn’t very knowledgeable about the music industry so I wouldn’t notice – but they were mistaken.”