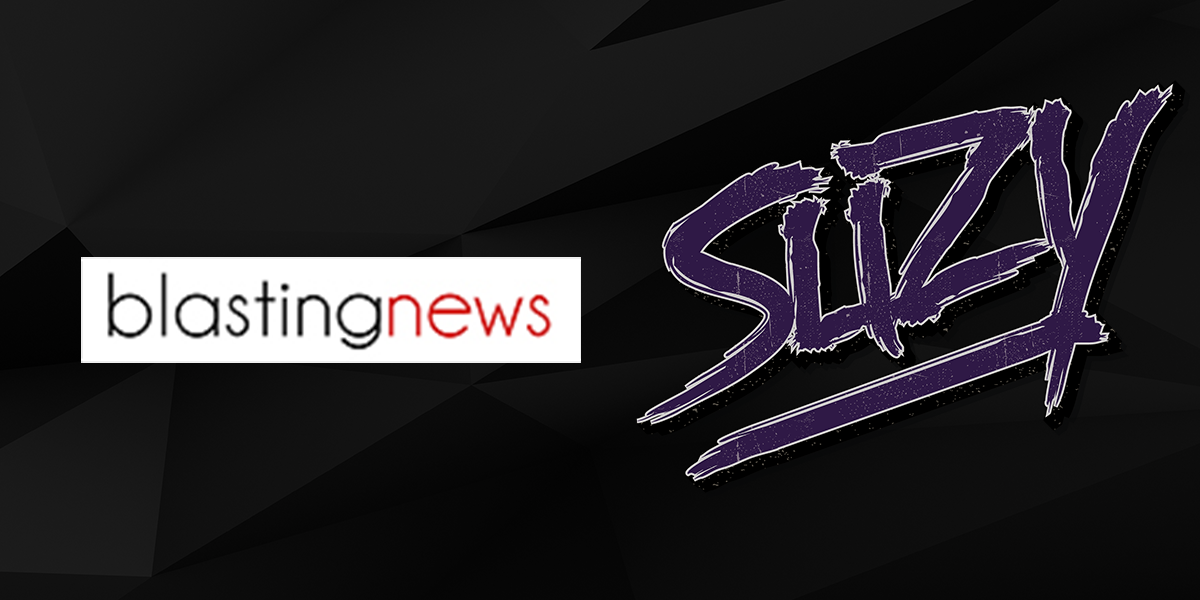 Age is nothing but a number, Suzy is living proof, releasing music and dreaming big with new single ‘Tomorrow’

by Kirsty Bright (article) and Milos Kitanovic (video)
Updated on January 10, 2020 at 5:17 AM
Interview with rock musician Suzy – Video

Her message is simple: You’re never too old to do what you love, life is a song so sing it meet musician Suzy who didn’t begin to pursue a professional music career until she was in her 50s. Quitting her stable day job as a PR to clients spanning over 30 years, Suzy dreamed big and has been releasing her own music.

I sat down to talk to Suzy via email about living her dream job in the music industry, her upcoming plans and working alongside music legends in the interview below.

Kirsty: Hi Suzy, It’s fair to say you truly are the perfect example of following your dreams, what made you decide to quit your PR/advertising job after 30 years and take on a music career?

Suzy: Well actually, I had already quit my job in PR long before that due to other things. For a while after that, I had my own clients but got tired of being a collection agent, so I fired all of my clients. Around that time, I started managing a musical theatre company that I had been doing some PR work for. After that, I started looking around to see “What I wanted to do when I grew up?” And decided that growing up was highly overrated so I still refuse to do that. (Laughs)

While looking for what I wanted to do, I started getting back into just enjoying music in a much larger way than I had previously.

I went to a lot of concerts and local shows, getting to know a number of local bands both here in Houston as well as in Dallas. It was suggested to me by one of those musicians that I should be writing songs since I used to sing and was also a writer. Things started taking off from there.

‘Life-changing experience to be on stage’

Kirsty: It all began with attending Rock n Roll Fantasy Camp, for those who aren’t familiar with the camp, what does it entail?

Suzy: Even though it technically begins with a Rock N Roll Fantasy Camp, it was certainly the catalyst for me after five years of beating my head against a wall. After five years of getting absolutely nowhere, I began to wonder if the universe was trying to tell me something. Maybe it was saying this is not what you need to be doing. Around that time, I got an email from RRFC saying that they were having their first ever songwriters camp, part of that camp was having your songs critiqued.

So I figured I would go and play my songs and see what the experts had to say. Joe Vitale (Joe Walsh) told me that I should continue and so I did, they no longer have that particular camp, but have incorporated parts of it in the masterclasses during their other camps.

I have done a number of those since then, most camps, you are paired with a group of musicians who are also campers around your same skill level and then have a rock star as your counselor.

You find out typically who is in your band and who your counselor is about a week before camp then once you get to camp, it is a LOT of work but also a LOT of fun. You only have a couple of days to decide which songs you are going to do at the shows at local venues, and which songs you are going to perform with the guest artists for the camps. Some of the artists I have performed with include Cheap Trick, Judas Priest, Paul Stanley, and Nancy Wilson to name a few.

You meet so many wonderful people and make really close friendships with a lot of them. I am still in touch with the people from my very first camp all the way through my most recent one.

Kirsty: What was it like to start a serious career after sharing the stage with the likes of Paul Stanley and Rob Halford?

I had already started working on my own music before performing with each of them. But it was truly a wonderful, life-changing experience to be on stage and hold your own with the likes of those guys. Both of them are great to work with.

Kirsty: For many, following their dreams are either squashed by those around them or the fear of failing.

What advice do you have for those who are unsure about how to go about pursuing their dream career?

Suzy: Just go for it, you won’t know until you try. Don’t let others, who don’t understand your dreams, determine what you pursue. They may want to keep you from getting hurt, but they don’t understand that it also hurts when the people who mean the most don’t believe in your dream. That not pursuing that dream leaves a hole in your life that you are always looking for something to fill. Maybe you don’t become a world-famous rock star, but you can still get out and perform at small venues, where you’re live at open mics, and fill that void.

Kirsty: What’s the best piece of advice you’ve ever received, and who was it from?

Suzy: You know, I’ve thought about this for a while and I can’t point to one thing. For me, it was a sum of my life experiences that brought me here. The one piece of advice that I give to others and that I try to live by is this: If you don’t ask the question, then the answer is always no. If you ask the question and the answer is no, then you aren’t any worse off then you were before you asked. And sometimes the answer is No, BUT sometimes it’s something even better than what you asked for. Sometimes it’s Maybe or even Yes.

You won’t know until you ask.

Kirsty: Once you got recording your EP “The Best Revenge” and saw it come to life how did it feel knowing the risk was worth the jump?

Suzy: This “Suzy” EP was definitely much more fun and more exciting than the previous one. “The Best Revenge” was such a trying experience that I really just wanted it to be over. Some of the songs on that EP had as many as six or seven versions. I didn’t really do much to promote it because I was burned out.

This EP was a much more positive experience and I decided to just go for, promote it and do everything I could to get it out there.

I have a whole team of people who I am working with on this EP. I know that at my age to think that I’m going to become famous, is rather unlikely but that’s ok because that wasn’t the dream. The dream was to make music, to enjoy doing it and to share it with others, I am living that dream.

Kirsty: Who inspired you to pursue a career in music, was there a particular song or artist that you felt connected to?

Suzy: Again, there really wasn’t one person. Even though my family wasn’t musical, there was always a lot of music being played. When I was really little and didn’t get out much, I wanted to be Karen Carpenter not the drumming part, but the singing.

Once I started going to friends’ homes who had older siblings, I started to hear a lot of 60s rock and started to really like those artists. When I got old enough to buy my own records, 60s rock was what I was all about, then moved to 70s, then 80s, etc. When I was in middle school, there was a new hard rock station in the area and I listened to it from the time I woke up until it went off the air every night. So many influences.

‘The dream was to make music’

Kirsty: The music scene is dominated by a variety of places for bands to showcase their music (Spotify, Youtube, Twitter, etc.). Are social media platforms hindering artists or giving them an opportunity to reach out further to new fans?

Suzy: I don’t think that they are hindering indie artists. Before, an artist had to be signed with a label to get their music heard outside of their local area. It was impossible to get radio play without a label. Now artists are able to share their music with literally the entire world. But it is a LOT of work and if you are like me, being a solo artist is a lot of work. While I have a team I work with, they are more big picture people or helping me get organized about what I have to do, but in terms of the day to day posting and responding and all the other things that have to be done to get the word out or even to release the music, that falls on the artist.

Kirsty: If you could put on a festival with your dream line up who would headline, and what would the theme be?

Suzy: Well, first of all, it would have to be several days because there are so many artists that would make up my dream lineup and I’m sure that after this conversation, I’ll think of some I missed. Just for a start, and in no particular order, Judas Priest, Heart, Cheap Trick, Adelitas Way, Halestorm, Shinedown, Sick Puppies, As Strange As Angels, Through Fire, Deadset Society, Last In Line, Gary Hoey, Sick Puppies, The Dead Electrics, Trouble In Heaven, Confess, Niterain, Vixen, Dirty Metal Lefty, Erik Tyler, Texez Mudd, Renaissance Rock Orchestra, Snake Bite Whisky, John Corabi, Edenlust, Dilana, Aerosmith, Slash and about a million more.

Kirsty: What keeps you motivated, and what are some of the goals you would like to achieve in the coming years?

Suzy: The main thing that keeps me motivated is the love I have for what I’m doing, alongside proving all the naysayers wrong is also a big motivator. I want to keep writing and releasing new music, I would love to be able to perform on a regular basis, maybe even tour.

Kirsty: And finally, what can we see in the future any sneak peeks what to expect?

Suzy: We still have music videos for three of the songs from the EP which we will be releasing, the next one that we will be released will be for “Time To Go” sometime around late January/early February. I think it would be perfect for Valentine’s Day. After that, we will release the one for “Road To Nowhere” and will end with the one for “Life Is A Song”. Hopefully, by then, we will have some new songs out, Norman and I are working on a few things now, so hopefully, we will keep releasing new music for the foreseeable future.