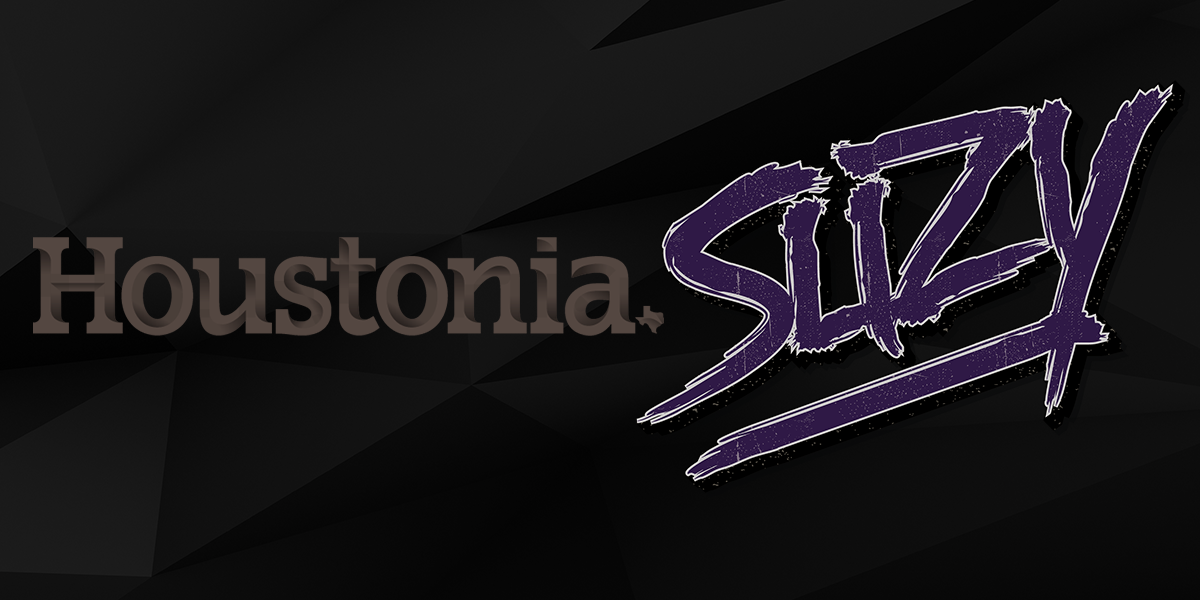 For this Kingswood-based rocker, it’s never to late.

IT’S NO ACCIDENT that when she’s performing, everything about Suzy screams rock ‘n’ roll. When she decided to take a shot at becoming like one of her idols, she donned black sunglasses and clothing and went all in.

The sixty-something Kingwood-based vocalist has a last name—it’s Wilson—but not onstage or in the studio. Suzy has decided she doesn’t need one. Pursuing a career as a rock star when many people are enjoying retirement may sound like a pipe dream, but Suzy doesn’t care. After all, she spent decades believing all the people who told her it was impossible.

Suzy grew up in rural Mississippi, in a town too small to even have any guitar players. In fact, until Jackson’s WJDX flipped to rock in the late 1960s, the only FM station around played country music. Meanwhile, her parents favored crooners like Dean Martin and Frank Sinatra. She remembers playing with her dolls when one day she heard a friend’s older brother listening to the heavier sounds of Frank Zappa and Steppenwolf.

But opportunities to perform the kind of music that really inspired her—“I don’t remember ever not singing,” she says—were limited. Even in college the typical bar scene that has nurtured many an aspiring performer was nonexistent; her school was in a dry county. She moved to Houston in 1980 and started going to shows, but those close to her shot her down when she mentioned wanting to step onstage herself.

“Everybody just looked at me like I was crazy, so after a while it was like, Okay, maybe they’re trying to tell me something,” Suzy laughs.

So she moved back to Mississippi and built a career in public relations and advertising before, in 1993, returning to Houston, where she worked at various firms before starting her own agency. She also headed up Kingwood’s Centre Stage Theatre for a decade. But promoting other people’s artistic passions only went so far—she wanted to pursue her own.

As with so many things, it was the Internet that helped Suzy find her voice. A Mötley Crüe fan message board connected her with fellow rock junkies, and as she met more musicians, Suzy also began working on her own songs. This time she didn’t even tell her family. “I just started doing it,” she says. “I think my husband knew about it. That’s one of the benefits I guess of getting older, is that you care less about what people think.”

She poured countless hours into recording her first release, but learned the hard way how frustrating that can be. “I’m sitting there going, Okay, do I start over a fifth time, sixth time—I’ve lost count how many times I started over—or is the universe trying to tell me I shouldn’t be doing this?” she says.

It was in 2014 that “one more catastrophe” spurred her to enroll in something she’d heard about called Rock ‘n’ Roll Fantasy Camp, a series of conferences that cost upwards of $5,000 per person, held mostly in L.A. and Las Vegas. Among other things, the camps offer to critique aspiring songwriters’ material.

Today she’s attended ten such camps and, indeed, gotten to live some of her fantasies, including hobnobbing with, learning from, and performing alongside established recording artists such as KISS’s Paul Stanley and Judas Priest’s Rob Halford while, she admits, trying not to fangirl out. “It’s four of the most intense days you’ll have in your life,” she says, “but they’re also four of the most fun.”

Being around her idols, Suzy says, has given her the grit to keep making music. During her first camp Joe Vitale, Joe Walsh’s drummer, encouraged her to keep at it, and she did, releasing her first EP, The Best Revenge, in 2015. For her followup Suzy enlisted Norman Matthew of Dallas-based As Strange as Angels, a fellow Mötley Crüe enthusiast, as producer. Suzy, which came out last fall, features Vitale on one track, playing drums, bass, and keyboards, and she even released a video for the EP’s first single, “Tomorrow.”

Although the project didn’t garner the attention she was hoping for, Suzy remains optimistic. She’s now intent on making more videos and finagling a way to get some gigs. The main thing is to just keep going, she says.

Suzy relishes performing at the end of each Fantasy Camp, taking the stage at venues like the House of Blues or L.A.’s Whisky a Go Go, which she’s done several times. She whips her purple bob and sings with gusto while her bandmates shred alongside her. Those moments, Suzy says, are “the best feeling ever.”

Part of what fuels her quest, Suzy admits, is trying to prove people wrong. “Hell, people tell me it’s crazy for me to be listening to hard rock and metal at my age,” she says. “If that’s the way they feel, then my music isn’t for them—I’ve reached an age and point in my life that I don’t let what other people think, or peer pressure, govern what I do.”